Friends, the day has come. All my herbals, and natural products all in a home of their own! Be sure to follow and check out www.terrysnaturals.com!

GIVE AWAY! Buy any @purplevalleycbd and be entered

So dang much going on this month! Please consider

Yup folks we are getting a second location! #comin

Time for fall cooking! Epicurean salts to make the

Bringing in the biggest jar of gummies yet! 3000mg

Your pets would like some CBDs come check out our

@purplevalleycbd cant keep these guys in stock. On

@purplevalleycbd is working so hard this summer! D

We have both #bamboostraws and #stainlesssteel ...

Attention Teachers and students. School is in and

@cbddaily.official back in the house! This stuff i

@adventurecbd bringing that healing salve to the m

@myaderm brings the new CBD blemish creme to the t

Mothers day is coming! Give mom the rest and relax

Align your chakras, meditate, make some noise! #he

You know we sell the source by @extractcraft_team 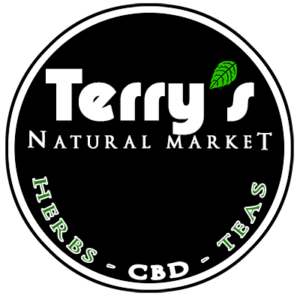 The idea of Terry’s Naturals and owning and selling hemp-based products began in 1989 when Terry Dawn Behrman began her education in the properties of hemp. Living and working in Colorado the wander lust soon took her after she had her first child in 1990.  By 1994 she took her education on the road and traveled of the highways from Missouri and California circuiting the many rainbow gatherings in-between, but always coming back to her home of Colorado. She and her husband drove twin city transit buses jury-rigged for road living. In the vast down time Terry mastered hemp crochet and even won awards for her patterns and design in 1997. By 1998 she had three kids and felt it was time to settle back down and devote herself to family life.

Settling in Pueblo Colorado she started her own headshop business in 2004. Her artistic flourish became evident by its unique name “The Hempen’ Lady and The Glass Hatter” which was derived from terry’s love of hemp and glassblowing. She sold glass and smoking accessories to the masses for many years, but due to the prohibition on marijuana Terry was never able to realize her dream of becoming a Hempen’ Lady… Until 2014. When prohibition ended Terry began her education in hemp again due to the influx of hemp and marijuana related research. Urged by the many problems in her small community; by 2017 she had integrated hemp products like CBD’s into her stores and in 2018 she created Terry’s Naturals.

Terry’s Naturals is a hemp-based business that sells medical – not medicated – products to help with many pain and health related issues. Our products vary, but Cannabidiol (CBD) is her bread and butter – almost literally! Terry’s Naturals sells CBD’s in many forms from tinctures to lotions or even gummies, but all our products offer the scientifically backed healing power of Cannabidiol.

When you buy from Terry’s Naturals not only are you supporting a small family run business with more than twenty employees, but you also support sustainable and green friendly hemp farmers.

Products have not been evaluated by the Food and Drug Administration and are not intended to diagnose, treat, cure or prevent any disease. NO REFUNDS – All sales are final.